Easylab board is prototyping board developed by Evidence Srl. It's essentially an expansion board of the Microchip Microstick dsPIC33F and PIC24H Development Board. 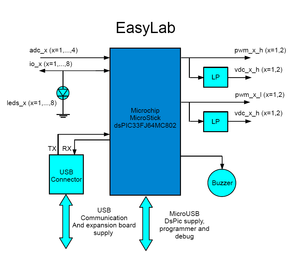 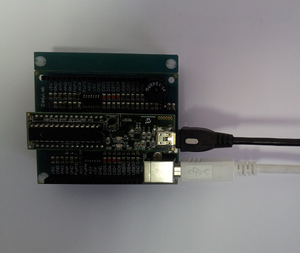 The library has been coded with dsPIC33FJ64MC802 as only test target, even though Microstick package come with a PIC24FJ64GP too.

Easylab Library comes with a complete example that shows the usage of some features of the board like PWM, ADC, Buzzer, USB/Serial and leds. The library and the MPLAB's. project are placed in the Easylab Software Packet.
In the How Compile and Run a MPLAB's project are placed all the instruction to do it.
At the beginning the test configure the PWM and the ADC channels. Then, using a simple cable, the user can connect the analogic output (AOx for PWM channel x) to the AD converter (ANx for ADC channel x). The value measured by the AD converter is then transmitted to the PC. You can interact with the application with any serial console (e.g Putty.exe, HyperTerminal, HTerm etc...).

So application steps are:

You can send 'ESC' char to restart the demo.