This small tutorial describes the steps to follow in order to create and compile two demo applications with CAL actors in Erika Enterprise using a Lattice Mico32 platform.

Make sure you have correctly installed both LatticeMico32 System and ispVM System on your Linux machine and exported all the environment variables needed for compiling a project. For any help please have a look at Tutorial: Installing CAL with ERIKA Enterprise.

In order to compile a project it is essential to create a library for the Lattice Mico32 platform as explained in Tutorial: Mico32 library for ERIKA.

We are now ready to create our first project and compile it. This first demo, called cal_demo, is composed of two system actors, a switch actor and a led actor called art_switch.c and art_led.c. These files are created in C language and can be found, along with the appropriate CAL files, into Erika's repository in: ~/Evidence/Erika/ee/contrib/cal/src. The two system actors are combined in a netlist file named switchled.nl that you can find into cal_demo's directory. The purpose of this demo is to read the state of the switches and button residing on the FPG-EYE and produce it switching on/off the appropriate leds on the board itself.

Open the Lattice Mico32 System and press the C/C++ button on the status bar: 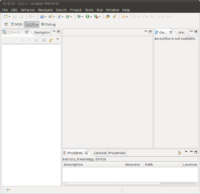 This screenshot shows the C/C++ button that must be pressed 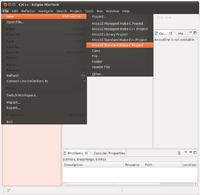 Give the project a name you like (i.e. cal_demo) and beware not to use the default location suggested by the program but the directory where resides the cal_demo into the Erika's trunk: 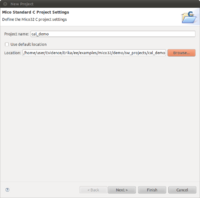 Press the Finish button and your project will be added to the list of C/C++ projects. 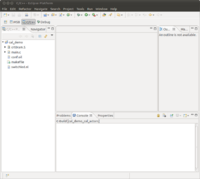 The files present at this stage of the project are:

To build the project right click on the cal_demo project and press the Build Project button: 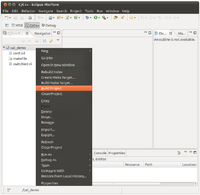 This screenshot shows how to build the cal_demo project

The result of the compilation is shown in the next screenshot: 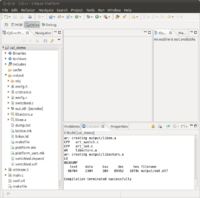 This screenshot shows the results of a correct building process

As you can see in the previous screenshot there's a newly created folder named output/folder where object and dependency files are placed. Here you can find:

To clean the project right click on the cal_demo project and press the Clean Project button: 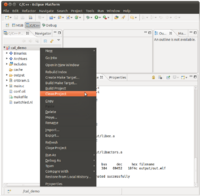 This screenshot shows how to clean a project

The main point of this second demo is that we used a CAL actor named gen.cal, a counter, instead of the previously used art_switch.c system actor; our counter is combined with the art_led.c system actor by the genled.nl. Both the netlist and the CAL actor files are placed in the project's directory. The purpose of this demo is to visualize the number produced by the counter switching on/off appropriately the leds placed into the FPG-EYE board

In order to create the project follow the steps described in the previous example, paying attention to the settings of the project: 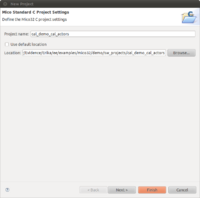 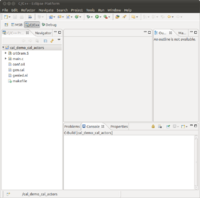 Looking at the files present at this stage and comparing them with the previous cal_demo example the main differences you will note are:

The result of a successful compilation (to be undertaken as explained in the previous example) is shown in the next screenshot: 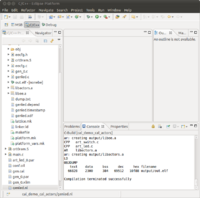 Looking at the newly created files you will notice some differences comparing with the previous example:

Create and compile a CAL project from scratch

You have now the basic knowledge to create your own CAL project from scratch. In the following you will find the steps to follow and the main points to be aware of: