First of all, you need the RT-Druid code. To get it, please check it out from the Svn repository. Then you need an editor. There are two options:

This page contains a few hints in case you are going to use Eclipse.

RT-Druid source code is organized in several Eclipse projects; most of them correspond to a feature or a plugin. These projects are organized in the repository in few categories:

What you need to develop RT-Druid plugins is:

Even if they are not required, you can install also plugins for versioning like subversive, or for bug reporting like mylyn.

In order to easily move RT-Druid plugins through various versions and installations of Eclipse, we use two variables ANT_HOME and MEM_OUTPUT_LOCATION. We can set both using the Eclipse preference window, opened through the Preferences command in the Window menu 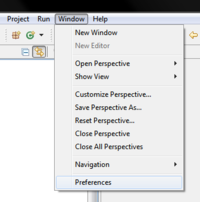 Preferences location in the Eclipse menu 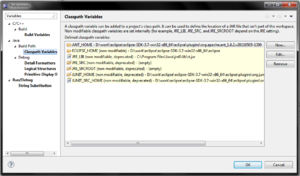 An example of ANT_HOME variable 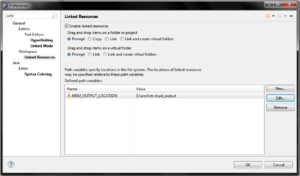 An example of MEM_OUTPUT_LOCATION variable

To import RT-Druid projects into your Eclipse workspace, you have to select Import... from File menu 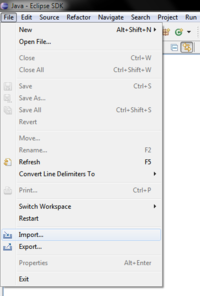 Then select "Existing projects into workspace" 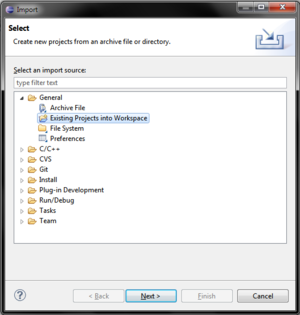 The window requires the path on your filesystem containing RT-Druid source projects (in this example, the path is E:\work\RT-Druid). If the path is correct you should see the list of the available RT-Druid projects, and you can select the ones to import in your workspace. The Copy project flag allows you to copy all the files in your workspace, otherwise Eclipse will read and write directly in the path you specified. Working set is useful to quickly select a group of projects. 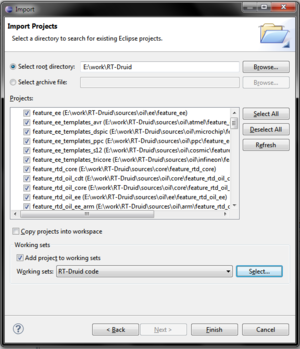 If you set "ant" and "output" paths, and if you have autobuild enabled (true by default), you should see Eclipse starting to compile all RT-Druid projects you just imported. 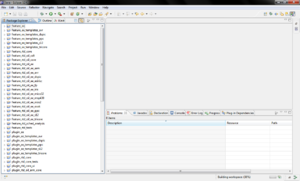