This small tutorial describes a set of steps needed to setup an Eclipse-based IDE for ERIKA targeted to Freescale MC9S12XS128 microcontroller.

A project for the DEMO9S12XSFAME evaluation board will be generated using the RT-Druid wizard.

In every way, at the end of this walk, you will be able to compile, link, and run your ERIKA application also on your custom hardware with a minimum effort, simply by remapping IO and peripherals. 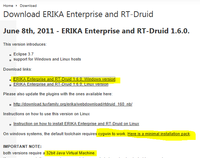 This screenshot shows an extract of the "Download ERIKA Enterprise and RT-Druid" page.

Use the following installation paths (where 'C' is the example hard disk identifier):

At the end of the updating process it's important to verify that the installed RT-Druid version will match with the 1.6.0.20111019_2125 one or following as shown in the following picture (from the Eclipse IDE menu: "Help" -> "About Eclipse", click on "Evidence S.r.l." icon, the 4th starting from the left): 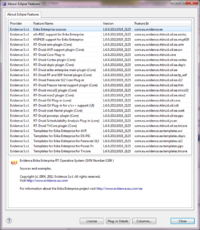 At the end of the updating process verify that the installed RT-Druid version will match with the following or a more recent release (from the Eclipse IDE menu: "Help" -> "About Eclipse"):

Use the following installation path: “C:\Program Files\Freescale\CWS12v5.1” and perform all the suggested updates.

(*) Despite of the field is referenced as "Cosmic Compiler Path", RT-Druid will automatically detect the installed CodeWarrior, generating the proper symbols in the source code, in order to make the right conditional compilation.

Last, restart the PC and install the eventually proposed updates by Eclipse.

Setup a project for Freescale MC9S12XS128

The main informations are stored in this page [5] that link to this example [6].

Important note: in order to use CodeWarrior SPECIAL EDITION it's necessary to manually define a symbol in the conf.oil file inside the created project. Follow this tutorial [7] to understand how-to. 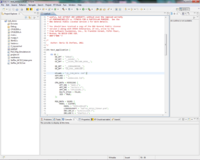 (this will take into account the number of steps the compiler will perform, by eventually managing the generation of symbols such as the intermediate result at compile time).

Create a new external debug configuration (HIWAVE) by clicking on the the button labeled "New launch configuration", located on the top-left.

Compile the fields as shown in the following picture to define the "Full chip simulation" profile: 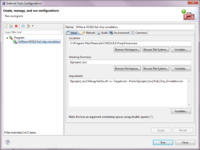 To use this HW it's necessary to generate a set of files needed to manage it. After they will be imported inside the RT-Druid project. In order to reach the goal, launch CodeWarrior and generate a new project: "File -> New project". In the dialog box opening, select "MC9S12XS128" as device and "P&E USB BDM Multilink" as default connection. Go ahead to the end of the wizard, without any change to the default settings. Both “P&E_Multilink_USB.ini” and the "cmd" directory have to be imported in the project, inside Elipse IDE. "cmd" contains a set of files with ".cmd" extension that are invoked as batch by HIWAVE, as described in the .ini content (really the only one command file not empty is “P&E_Multilink_USB_Erase_unsecure_hcs12xe.cmd”). In order to import these files in the project is necessary, first of all, to create a new folder inside the Eclipse project and rename it as "cmd" (right click on the root of the project in project explorer). Then from the Eclipse menu "File" -> "Import", in the next form "General" -> "File system" then set all the parameters as shown in the following picture (the field "From directory" has to reference to the "cmd" directory inside the ad-hoc created project with CodeWarrior): 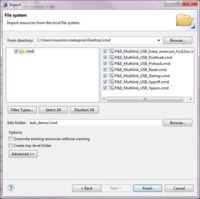 Repeat the same import operation for the .ini file that has to be imported in the project. The final result should be as in the following picture: 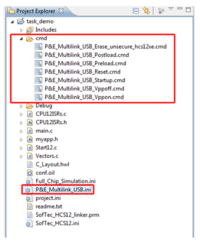 Windows seven workaround: in the case you haven't got a P&E Multilink USB BDM rev. C, it's possible use it the same after installing a Win XP virtual machine in wich configure and run the development environment, as described in this document.

It's normally convenient to make a build of the project before launch the debugger. This behaviour is settable by configuring the "build" sheet as shown in the following picture: 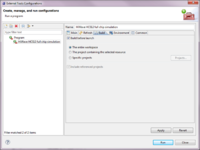 Finally, start debugging simply by clicking on the highlighted icon (see picture below) in the application bar!

NOTE: So that the parameters passage will correctly happen, it's necessary that the main folder of the project has been selected in the project tree (because the evaluation of the environment variables for the launch of the external tools by Eclipse is performed on the basis of the currently selected object in the IDE).